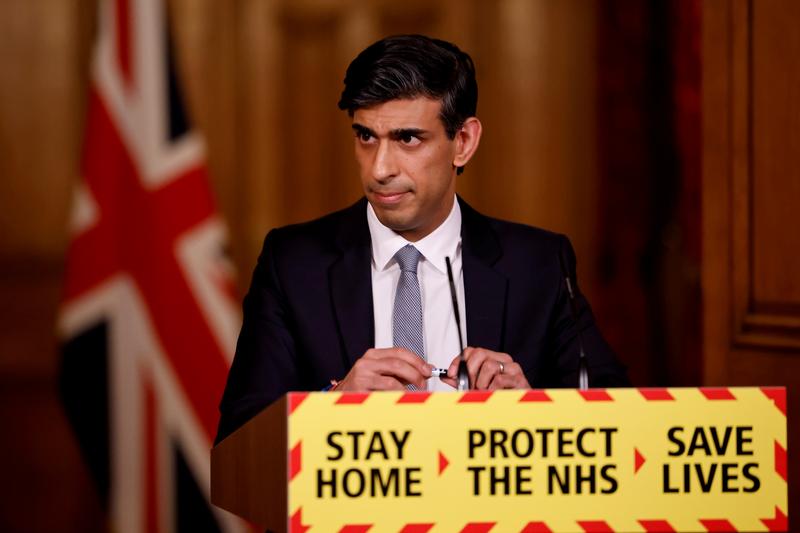 LONDON (Reuters) – Britain’s record-breaking borrowing to pay for the coronavirus crisis is likely to be a little lower than forecast, after data published on Friday showed the budget deficit grew by less than expected in the first two months of 2021.

The government borrowed 19.1 billion pounds ($26.6 billion) last month, a record for February but less than the 21.0 billion pounds forecast in a Reuters poll.

The deficit for January was revised down by 5.6 billion pounds, largely reflecting lower government procurement spending, the Office for National Statistics said.

The budget deficit in the first 11 months of the financial year has soared to almost 279 billion pounds, the highest relative to the size of the economy since World War Two.

But unless there is a major borrowing surge in March, the deficit looks likely to come in below an estimate set by the Office for Budget Responsibility.

The OBR said this month that the deficit was likely to surpass 350 billion pounds in the financial year which ends on March 31.

The year-to-date figures published on Friday by the ONS do not include the 27.2 billion pounds of COVID loan write-offs that the OBR estimates will need to be made.

Finance minister Rishi Sunak on March 3 announced a budget plan which included 65 billion pounds in further stimulus to help the economy through what he hopes will be a gradual lifting of COVID restrictions by the end of June.

Responding to Friday’s data, Sunak said his 352 billion pounds of total extra spending and tax cuts so far had been the responsible thing to do.

“But I have always said that we should look to return the public finances to a more sustainable path once the economy has recovered and at the budget I set out how we will begin to do just that,” Sunak said in a statement.

Sunak’s budget represents what the Bank of England has called a “material fiscal loosening in the near term” but there will be tax rises and a reduction in spending further out.

The Institute for Fiscal Studies, a think tank, said most of the spending cuts implied by the budget were “simply unrealistic, and borrowing or taxes will be higher than planned.”

Borrowing in the 2021/22 financial year, which starts in April, is estimated to fall to 234 billion pounds according to the OBR, still more than four times the deficit in 2019/20 which included only one month of the coronavirus crisis.

Public debt in February stood at 2.131 trillion pounds or 97.5% of annual economic output, holding at levels not seen since the early 1960s, the ONS said.